A permanent Student Art Gallery in your school!

Our tiny rural school district encompasses three small towns and lots of outlying areas that were originally three autonomous tiny school districts.  When the school districts consolidated in the 1970's, they retained the three buildings, and one town housed a primary building, one housed a middle school, and the high school was in the third town.  It took many years before the district agreed to give up the tiny inadequate buildings, and finally build one K-12 building in one town.  Once the new building was complete, it was beautiful and brought the whole school community together.

At that point, I proposed the art gallery, based on an idea I'd seen in a visit to another school.  I noted there was a long stretch of boring unbroken hallway  (no doors or windows on the side that ran along the back of the big gymnasium, and on the other side, the door and window of the nurse's office, but not much else).  The proposal was presented to the administration and school board, and was heartily approved, as long as I could find funding.  I spoke to the PTSA, and they agreed on an amount to contribute each year for the cost of professionally matting and framing artwork.  In exchange, I scheduled art projects with my students for an annual fundraiser organized and managed by the PTSA.  In other words, it was a mutually beneficial relationship.  I also formed a relationship with a local framer, who gave me discounted rates for mounting/matting and framing the artwork.

During the school year, I saved artwork that seemed "special".  At the end of each year, I invited a few other staff members, including the principal, to help make the final selection of works to be framed.  They viewed the works without knowing who the student artists were, to prevent bias.  Originally, we added three pieces a year with the PTSA funding.   I always made the final decisions after the artwork had been reviewed by several others.  When possible, I always selected the artwork of those kids who were less likely receive recognition in other ways.  Letters were sent home with the selected students, to them and their parents, with a form for permission.  Students could decide they preferred to keep their artwork if  they wanted, but over the years, I only had one student opt out of being included in the gallery.  I photographed each student with his/her artwork, and using small donated frames, I framed the photos so that each student received their photo as a gift in exchange for the donation of the artwork.  Most years, the artwork was exhibited in a student art show before being permanently installed in the school. 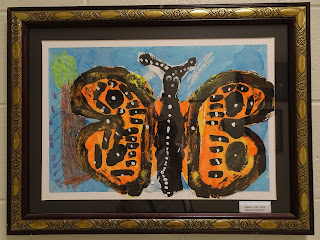 After a few years, my funding temporarily fell through.  My framer donated me a bunch of mat board, and assorted frames that were not needed, and I cut the mats and framed the work myself.  At this point, we started adding more work, sometimes four or five pieces in a year, and eventually, the PTSA was again able to provide funding.   I think, if you were considering beginning a similar gallery, that you'll find most framers are very willing to donate mat board and  sometimes frames, and that there's lots of options for funding a gallery in your school.

At some point, the high school art teacher began a similar gallery in the high school wing of the building, so now the gallery extends to the far end of the same hallway.  I retired 5 years ago, and by that time, the elementary gallery contained over 80 beautiful works of art, with an estimate of another 30 pieces by secondary students.  Several new pieces have been added since I retired.

So why is it worth your time and effort to develop an art gallery in your school?  It's simple.  EVERY PERSON who walks into the school will see the artwork.  Administrators will see it; community members will see it; parents will see it. The gallery will give them a visual reminder of how art can bring life to an otherwise empty and colorless space, and remind them of the importance of keeping art as a part of our curriculum.  The kids who are represented will come back years later as adults and feel that they are a part of the school when they see their work still hanging.  (About 1/2 the students represented on the elementary hallway have graduated from high school!!)  At some point, there will be kids who can say "my mom (or dad) painted that!" 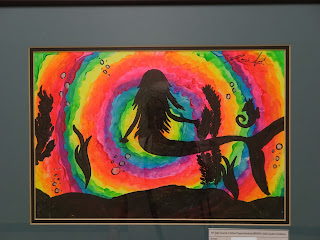 The public support for or recommendation of a particular cause or policy.

Happy Youth Art Month , and best of luck on your YAM events!    Remember to share all the great things you are doing with your state o...